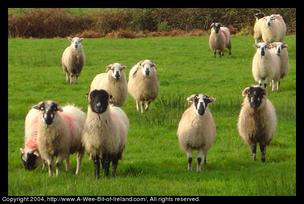 My great-great grandparents, Bryan O'Donnell and Bridget Dougherty O'Donnell, emigrated from Moville, County Donegal, Ireland to Canada between 1834 and 1838 and were living in Arthur, Wellington, Ontario, Canada by 1841. They were lucky enough to move before the famine and the advent of the coffin ships.

The Inishowen Lighthouse at Stroove was completed at about the time they moved to Canada.

Bryan and Bridget were the parents of the first Irish child born in Arthur Township. She was named Mary Ann Victoria. Their children were:

Around the 1840's Bryan O'Donnell owned 50 acres of land which was the south half of Lot 15, West of the Owen Sound Road. He donated approximately two acres of land for a church and cemetery. A log church was built here by Bryan O'Donnell and his sons along with other volunteers. The log church was still incomplete when Father John Cullen said the first mass in it in 1851. The door had not been cut so the congregation entered by way of a window.

A source of information about the area where my great-great-grandparents lived in Canada is at http://jubilation.uwaterloo.ca/~marj/history/lhistory.html.

More about Moville, Inishowen, Donegal, Ireland is at http://www.movilleinishowen.com/.

There is a wikipedia article about Moville that says:

A View of Moville's Green and Lough Foyle coast.

Moville (Magh Bhille or Bun an Phobail in Irish) is a town in County Donegal close to the northern tip of Ireland. The town enjoys a scenic location on the western shore of Lough Foyle, about 30 km from Derry, which lies across the border in Northern Ireland. Its most attractive feature is its handsome Green, a large seaside park featuring bandstands, walking trails, playgrounds and sweeping views east across the waters of the lough to Northern Ireland. As a result of this pleasant location and the proximity of several marvellous beaches, Moville receives many visitors and daytrippers in the summer months.

We travled to Moville and took some photos of Moville, Greencastle, and Stroove in August of 2013.

In the second half of the 19th century, Moville was a significant point of embarkation for many travellers, especially emigrants, to Canada and the United States of America. Steamships of the Anchor Line, of Glasgow, and others en-route from Glasgow to New York City regularly called at Moville to pick up additional passengers. Today, the town receives little maritime traffic; it retains its small fishing harbour, but the important commercial fishing port at Greencastle lies only a few miles away.

The same ships used to export lumber (the port of Quťbec's main commercial activity) to the British Isles, transported emigrants from the British Isles to North America. Travelling conditions were arduous and often had tragic consequences. Many immigrants fell ill and died at sea. Others, particularly young children and the elderly, arrived at their destination in a pitiful state of health. Quťbec hospitals and their medical staff were rapidly overwhelmed.

In 1803, the British Parliament passed the first of a series of laws intended to regulate the transportation of immigrants, to protect emigrants on board ships from abuse by transportation companies, such as exorbitant rates and poor sanitary conditions. The Passenger Act imposed better conditions relating to hygiene, food and comfort for passengers travelling to North America. However, this law was not always rigorously applied by ship captains and the spread of contagious diseases accelerated.

Around 1826, Asiatic cholera appeared in India, reached Moscow, and finally spread to France and the British Isles. Aware that this disease would eventually reach Quebec, the Sociťtť des immigrants de Quťbec (Quebec Immigrants' Society), founded in 1818 and the only charitable organization providing assistance to immigrants, considered limiting immigration and even prohibiting it. Since it lacked the authority, the society reminded the government authorities of existing laws relating to passengers, and of its responsibility to provide assistance to immigrants. In 1832, confronted by the real danger of an epidemic, the government of Lower Canada passed the Quarantine Act, and built a quarantine station on Grosse-őle on the St. Lawrence River, downstream from Quťbec. There was a quarantine station at Pointe-Lťvy, however it was unsuitable during an epidemic because of its proximity to the city. By laying down strict control measures for ships from Europe, the authorities expected that they could protect the local population from the disease.

At http://www.theshipslist.com/ships/passengerlists/agnes1847.shtml is a passenger list that serves as an example of why these were called coffin ships. Imagine the sorrow of those who lost so many loved ones on the trip from Ireland to Canada.

According to http://www.emigrantletters.com/IE/output.asp?ArticleID=211374&CategoryID=6574&ArticleOutputTemplateID=452&ArticleStateID=2 webpage which no longer seems to exist.

Steerage passengers had to cook and fend for themselves, crammed together on the lower decks. Overcrowding was a constant problem leading to outbreaks of cholera and typhus. David Hollet observed that British emigrant ships on the north Atlantic run only allowed ten feet of space for every adult, two children counting as one, and infants not being include in the calculations. American ships, being somewhat better, allowed for fourteen feet for every steerage passenger. In relation to food, it was only incumbent on ship owners to provide steerage passenger with water and biscuits the quality of which was often questionable. Steerage passenger were expected to bring their own food on board and cook it as required on the few grates provided. Cooking took place on the open deck leaving passengers open to bad weather and the danger of fire. The staple food of Irish emigrants on the ships was oatmeal and water, boiled into what was called mush, or burgoo by the sailors. Pigs were often killed and cooked on deck. Often fires could not be lit for long periods due to weather conditions and passengers were compelled to eat raw food.

Health care on these ships was either totally inadequate or non-existent. Most ships had no proper toilet facilities and even when rudimentary water closets were provided, these were located on the open deck, and could not be used in rough weather. Disasters and shipwrecks also took their toll.

A-Wee-Bit-of-Ireland.com is a proud supporter of The Ireland Canada Monument project.